Fifty years ago, a coalition of student groups started the Office of Community Projects (AKA Cal Corps and now the Public Service Center) to give the UC Berkeley community a pathway toward creating a more just and equitable world. Today – through courses, service-learning trips, mentoring and other experiential opportunities – more than 5,000 students contribute to 250 organizations a year.

Light refreshments will be served.

Invitation only. Space is limited. Please respond to Cardis McKines-Jones at mckinesjones@berkeley.edu or 510.643.3249 by October 13. 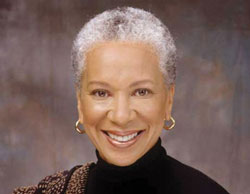 Angela Glover Blackwell J.D. ‘77, Chief Executive Officer, started PolicyLink in 1999 and continues to drive its mission of advancing economic and social equity. Under Blackwell’s leadership, PolicyLink has gained national prominence in the movement to use public policy to improve access and opportunity for all low-income people and communities of color, particularly in the areas of health, housing, transportation, and infrastructure.

Prior to founding PolicyLink, Blackwell was Senior Vice President at the Rockefeller Foundation, the founder of the Oakland (CA) Urban Strategies Council, and a partner at Public Advocates, a nationally known public interest law firm.

As a leading voice in the movement for equity in America, Blackwell is a frequent commentator for some of the nation’s top news organizations, including The New York Times, the Huffington Post, Washington Post, Salon, and CNN, and was most recently published in the Stanford Social Innovation Review. She has appeared regularly on such programs as public radio’s Marketplace, The Tavis Smiley Show, Nightline, and PBS’s Now. Blackwell has also been a guest on the PBS series Moyers & Company and PBS’s NewsHour. She is the co-author of Uncommon Common Ground: Race and America’s Future (W.W. Norton & Co., 2010), and has contributed to What It’s Worth: Strengthening the Financial Future of Families, Communities and the Nation (Federal Reserve Bank of San Francisco and CFED, 2015), Worlds Apart: Poverty and Politics in Rural America (Yale University Press, 2014, second edition), and Ending Poverty in America:  How to Restore the American Dream (The New Press, 2007), among others.  In 2013, Blackwell and PolicyLink collaborated with the Center for American Progress to produce All In Nation: An America that Works for All.

Blackwell serves on numerous boards, including the Children’s Defense Fund, the W. Haywood Burns Institute, the U.S. Water Alliance, and FSG. She also advises the Board of Governors of the Federal Reserve as one of 15 members of its Community Advisory Council. Angela earned a bachelor’s degree from Howard University, and a law degree from the University of California, Berkeley. 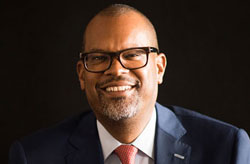 Fred Blackwell M.C.P ‘96, is the CEO of The San Francisco Foundation, one of the largest community foundations in the country. The San Francisco Foundation works hand-in-hand with donors, community leaders, and both public and private partners to create thriving communities throughout the Bay Area. Since joining the foundation in 2014, Mr. Blackwell has led the Foundation in a renewed commitment to social justice through an equity agenda focused on racial and economic inclusion.

Mr. Blackwell, an Oakland native, is a nationally recognized community leader with a longstanding career in the Bay Area. Prior to joining the foundation, he served as Interim City Administrator for the City of Oakland where he previously served as the Assistant City Administrator. He was the Executive Director of the San Francisco Redevelopment Agency and Director of the Mayor’s Office of Community Development in San Francisco; he served as the Director of the Making Connections Initiative for the Annie E. Casey Foundation in the Lower San Antonio neighborhood of Oakland; he was a Multicultural Fellow in Neighborhood and Community Development at The San Francisco Foundation; and he subsequently managed a multi-year comprehensive community initiative for The San Francisco Foundation in West Oakland.

Mr. Blackwell currently serves on the board of the Independent Sector, Northern California Grantmakers, SPUR, the Bridgespan Group, the dean’s advisory council for Berkeley’s College of Environmental Design, and the community advisory council of the San Francisco Federal Reserve. He previously served on the boards of the California Redevelopment Association, Urban Habitat Program, LeaderSpring, and Leadership Excellence. He is a visiting professor in the department of City and Regional Planning at UC Berkeley and the Co-Chair of CASA. He holds a master’s degree in city planning from UC Berkeley and a bachelor’s degree in urban studies from Morehouse College.

Give to the Public Service Center

You can ensure that public service is a hallmark of a Berkeley education for generations to come.