Home / Continuing to Give Back: From Skid Row to Rwanda 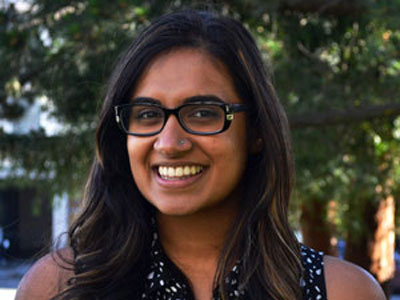 If you’ve stopped by the Public Service Center anytime in the last year and a half, chances are Ursula Kajani has greeted you at the front desk. She’s one of the Center’s program assistants, helping other students get involved. When she accepted the job, she had no idea it would lead her to deep involvement as an Alternative Breaks leader, member of the PSC’s Student Advisory Committee, and 2016–17 winner of the Mather Good Citizen Award. According to PSC Program Manager Rajelin Escondo, “Service is part of her core self.”

When Ursula came to Cal, she wasn’t sure what direction her academics or service should take. “I didn’t know what I wanted, just that I wanted to give back.” After participating in an Alternative Breaks trip focused on health and homelessness on Skid Row, she knew she’d never be the same. “Not only did the trip change the way I thought about homelessness, it taught me how to think critically for myself.”

In an effort to support other students in having such life-changing experiences, she took on a director role with Alternative Breaks, supporting 20 Alternative Breaks leaders in crafting trips that prioritize community partner need and participant learning. It was for this work that Ursula was awarded with the Mather Good Citizen Award.

Of her many experiences with the Public Service Center, Ursula reflects, “I’ve learned so many tangible skills like translating ideas into practice, and also things like how to be accountable without losing compassion. I’ve realized the importance of historical context in framing current events. My work with the PSC has helped me constantly reflect on the tension between ideology and practical application.”

After graduating this spring with a major in public health, Ursula is headed to Rwanda where she will work with a maternal and child health program through the Peace Corps. She knows her service experiences have prepared her for future social justice work. “I want to extend my appreciation to the PSC for helping us students find critical lenses while learning how to be ourselves. It was really a defining feature of my Cal career.”