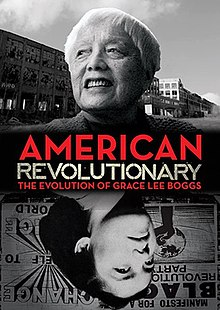 What I’m thinking about these days is American Revolutionary: The Evolution of Grace Lee Boggs, a film about this extraordinary thinker and organizer who has been a huge inspiration and guiding elder in my social justice journey. Born in 1915, Grace was one of the first Chinese American women to earn a PhD in Philosophy from Bryn Mawr in 1940. Unable to secure a professorship, she took on a job at the University of Chicago library and became engaged in tenant’s rights organizing. After meeting legendary African American Marxist CLR James, she began organizing for the Communist party and then later along with her husband Jimmy, became one of the leading Black Power organizers in Detroit. The Detroit uprising of 1967 led Grace to shift her thinking again as she began to grapple with what (r)evolution and transformative change really mean. Grace lived until she was 100 years old, and throughout her life never stopped thinking, learning, acting, and growing.

Join us for a film screening and discussion at 12:30 at the PSC on Oct 21st!
http://americanrevolutionaryfilm.com/